Let’s Check In On Chopped 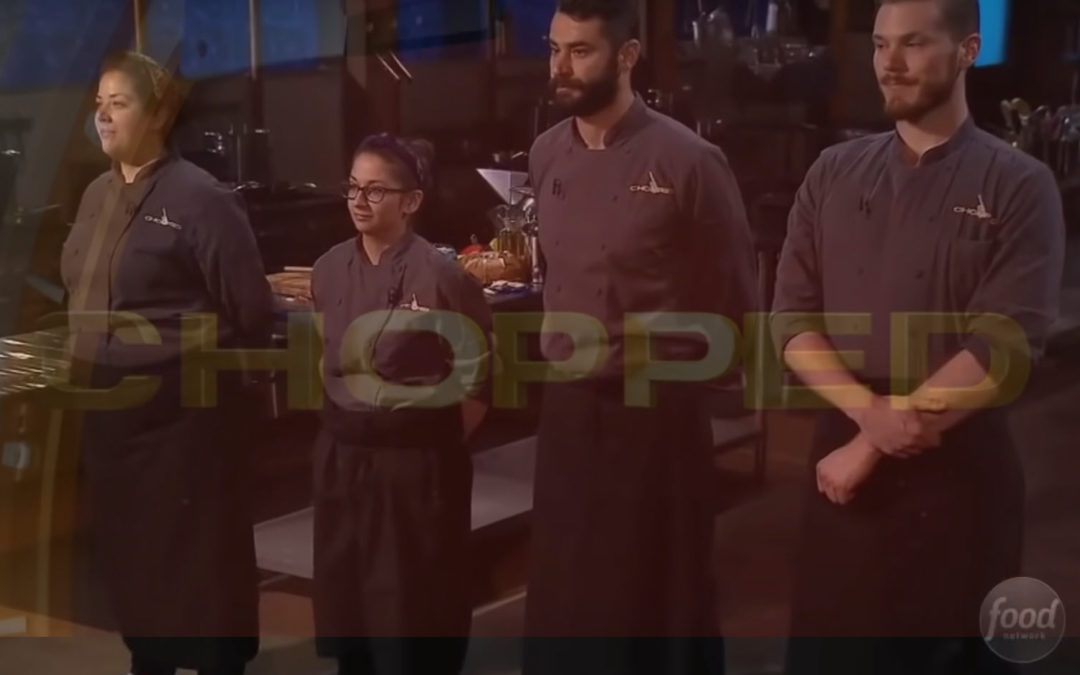 We all know Chopped, the competitive TV show on Food Network. Four people get together to use random ingredients in an attempt to make the best food from the basket. If you think this is a new idea, you are very wrong. It started in 2009 and at the time of this writing, has 47 seasons. That is just ridiculous. And if you have watched a good amount of the episodes, you know they are all pretty formulaic and predictable. Here is how each episode of Chopped usually goes:

Ted Allen says welcome in the same way as the previous episode and introduces the chefs. All of them pose with a plate of food that doesn’t look very appetizing.

1. Bro chef who is overly confident. This is who you will be rooting against.
2. Nervous soft spoken girl. Most likely no chance.
3. Normal guy who appears to be a good chef.
4. Ditzy good looking girl. Most likely dad bought her restaurant for her.

Ted says how the game works and then let’s everyone open the baskets. 20 Minutes for the first round which is the appetizer round. 3, 2, 1 GO!

Chefs get to work and start to get a plan together. How to combine grape jelly and pork ice cream… that is the question. Everyone gets cooking.

Meanwhile, the judges start to make comments, none of which are very positive…. “No clue what Donald is doing yet. He is just kind of staring.” and “I can smell burning fish eyeballs. We all know that can be disastrous.” Cut to the chefs cooking and commenting. Bro chef says he is dominating this dish. Nervous girl accidentally cuts herself. Normal guy looks like he has some solid ideas going. Ditzy girl claims “Well in Texas, we have what is called hayseed casserole. So I am going to do that.” Ted announces 30 seconds left and for some reason, the judges start trying to motivate contestants. Most likely they have been done for a minute or two and the show is just cut in a dramatic way. Either way, time is up. Bro chef comments that he doesn’t see anything special on others dishes. Nervous girl forgets her dressing that has 2 mandatory ingredients in it.

Now on to the judging! All contestants have nervous looks on their faces.

Each explains what they made. The judges always lead with something positive but will always have something that didn’t work… “I really like how you coated the deer penis in Cheetos, that gave good crunch. But I can’t taste the canned beets. I want more beets!” Inevitably, Ted will ask one person what they will do with the money. This is the person who will be chopped in the first round. Producers have learned that the audience wants to know where the money is going so they can judge them and their moral characters. They go through all 4, chit chat about the cooking philosophy and bring up anything tragic that has happened in their life. My rule of thumb is if you cry on TV, I automatically root against you. Keep it together.

Then are told to go and await the decision. Judges usually save 1 or 2 people and then have a bottom 2. It is always the nervous girl and the ditzy girl at the bottom because they clearly has the worst dishes. If they are all even, the judges will try and confuse viewers with made up cooking terms like… “Needs more acid.” WTF is acid in food and why are we judging on it? 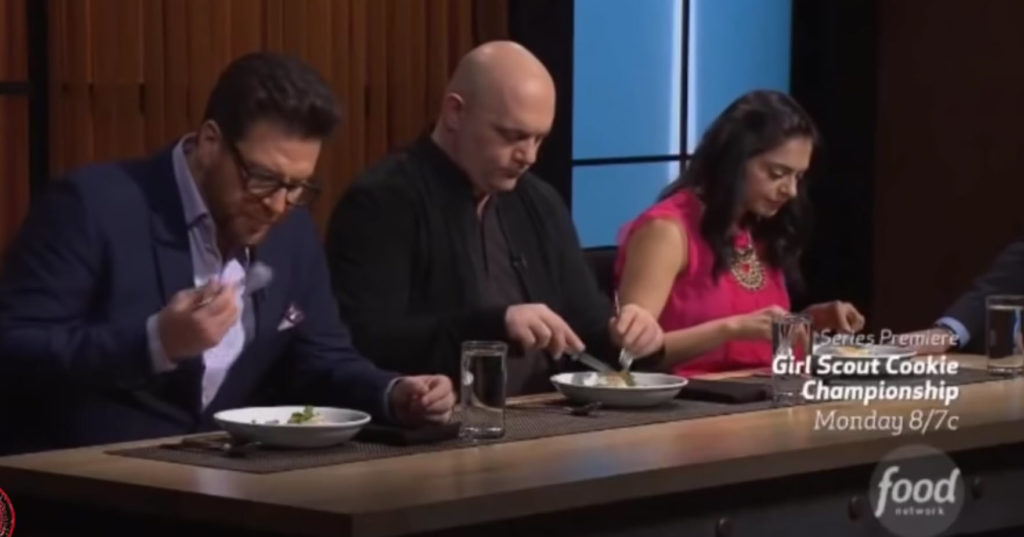 Contestants are brought back in, and with the biggest sigh in TV history, Ted says… Janet, you’ve been chopped. Judges.” Then one judge will completely destroy the dish they made listing reasons they were the worst. Sometimes they hold up the uncooked meat or even spoon the thick sauce into the bowl. But the point is made and the nervous girl does the shame walk. They say something like “I am proud of the dish I put out and would not change a thing. I will be back!”

Pretty much the same thing, the 3 remaining chefs open their baskets. Bro chef lets out an “AW Yeah!” and ditsy girl let’s out a “WAHT???”

They get 30 minutes for this dinner round and things go pretty much the same as round 1. Since nervous person is no longer there, the round appears to run smoother than the first.

Ditsy girl is eliminated because she is not the quality of chef as the other two. The only reason she was saved in round 1 is because nervous girl forgot multiple ingredients.

Here is a fun video reveling some behind the scenes info and fun facts.

Round 3 For The Win

At the beginning of round 3, they line the last 2 cooks awkwardly across from each other and Ted asks something like… “Well, who is going to win?” I have never seen an episode where this exchange is not extremely awkward. Bro chef says, “Definitely me bro.” and the normal guy, who would rather be just cooking, knows he has to say something and gets out “No way,” or something just as crushing.

This is the dessert round and typically you get a less tough basket because who can make a dessert out of frog legs and mac N cheese. Someone almost always makes ice cream but it will get over churned and become butter. Chopped will mix up the winner here a little bit. Half the time it is the bro, half the time it is the normal guy. I guess they have to keep you guessing.

SNL did a nice parody recently.

With this many seasons and episodes under their belt, Chopped has used well over 50 different judges. But we have our favorites because of their personality, toughness or even their hair. Here is our Top 5.

5. Scott Conant – he gets this spot for his hair and hair only. It never moves… Love it.

4. Amanda Freitag – She’s like the Karen of chopped but not really. She knows her stuff and can be mean, but I think she is still a nice person who cares. So not the Karen.

3. Maneet Chauhan – If any of these famous chefs appear to be a normal person with a good heart, it would be her.

2. Alex Guarnaschelli – Knows her stuff and seems to be the best chef in all of network food cooking TV. Makes good comments.

1. Marcus Samuelsson – Seem to be down to earth and a regular person who is a really good chef. Would love to go to his NY restaurants.

On the flip side, I can almost guarantee Geoffrey Zakarian and Chris Santos are the biggest dicks in real life. Too good for an autograph and to bad to be faithful to a wife. Maybe that is too harsh but no way they are pleasant in the real world. They fart in wine glasses and smell it for dessert. 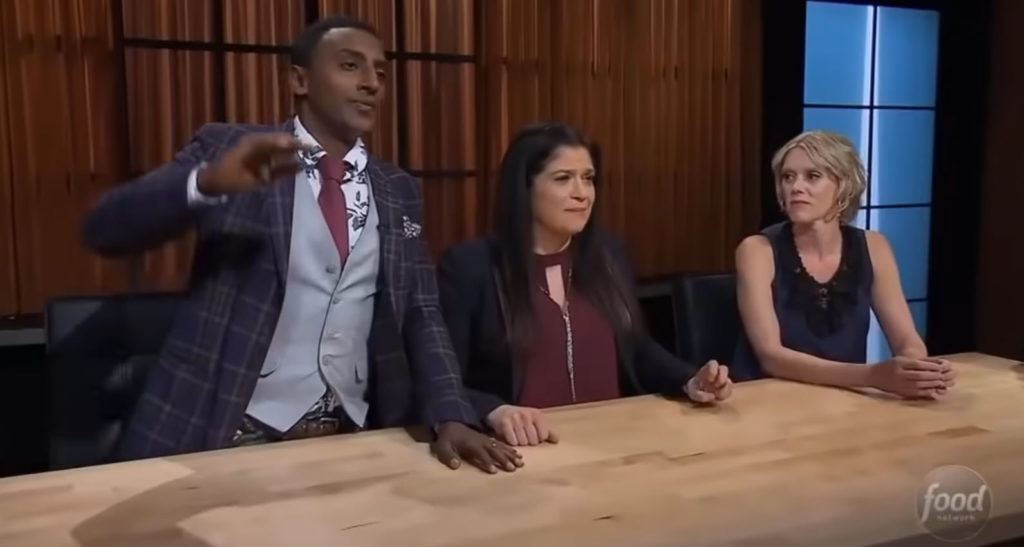 There you have it, a standard episode of Chopped. Yes, there are subtle changes to each episode but it will follow these course of events. And we know this is TV. The producers want dramatics. They want nervous people and overly confident chefs and everything in between. It might be good to have 4 of the most talented down to earth chef compete, but not every episode. You probably have a better chance to get on if you have some quirks.